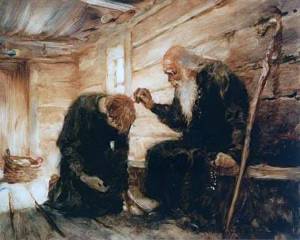 In 1979, Ken Davis published an article that outline the characteristics of an orthodox Charismatic movement (as opposed to heretical ones), and then proposed that the 16th Century Anabaptists were such a movement. Taking up his work, I see the 4th Century Desert Fathers and Mothers were another such movement. This series explores those characteristics and shows how they were expressed among the Desert Saints.

Orthodox movements link the gifts of the Spirit with the fruit of the Spirit (i.e. godliness and moral uprightness). Heretical movements either ignore this link, leading to antinomianism, or exaggerate it, leading to an elitist perfectionism. Some movements manage to do both, resulting in a kind of gnostic super-spirituality that makes sin ontologically impossible regardless of behaviour.

The Fathers linked spiritual power with asceticism and virtue. Antony himself did not engage in a miraculous ministry (or ministry of any kind) until he had spent fifteen years learning the ascetic lifestyle and then twenty years practicing it in isolation. Elsewhere in the literature, it is common to encounter the language of an abba “being deemed worthy of” a spiritual gift. Nevertheless, simply because one could perform miracles did not mean one was safe from sin. The need for constant watchfulness over one’s own soul never ended.

Humility when exercising a miraculous gift was important. The fathers believed that demons were cast out, not because of the exorcist’s ascetic achievements but because of his or her humility. Some abbas had the gift of healing but were also given diseases (of which they eventually died) in order to keep them humble – it made it clear to them and others that the gift was not a power they could independently wield. It was not the abba, but the Lord who performed the miracle, as Antony observed: “The performance of signs does not belong to us; it is the Lord’s work”.

Although the Desert Fathers saw themselves on the narrow path, they did not look down on those in the wider church who did not follow their lifestyle. In fact, there are several stories of renowned abbas who were shown “seculars” (i.e. non-monks) in a vision who were as holy as they, if not more so. The abbas also encouraged seculars to pray for miracles, for they had the same access to God the abbas themselves had. Thus, holiness was not the exclusive possession of a desert elite, but equally accessible to all walks of life – although the abbas would say that it was harder to keep one’s vision focused in the distractions of city life.

At the end of the day, the purpose of pursuing the ascetic life was not to exercise spiritual power, but rather to become more Christlike. Antony taught that “not for the purpose of gaining foreknowledge are we to train ourselves and labor – but rather in order that we may please God in the way we lead our lives”. However, just as seeking first His Kingdom meant the seeker would also be given “all these things”, so the abbas observed that the virtuous among them could perform astonishing miracles. While spiritual power was not to be the goal of the monastic life, the abbas found it to be a frequently encountered blessing.

One thought on “The Signs of Genuine Charismatic Christianity – Holiness”